Tackling some pretty massive challenges in a very tight space of time appears to be a habit of ours! Shirley may just have been our most ambitious project yet. 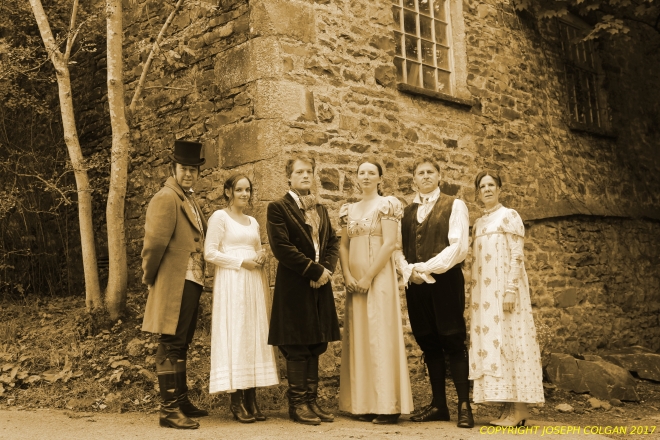 Shirley – the first ever performance adaptation of the Charlotte Brontë novel – has been in the company’s repertoire since we presented a very successful reading of it at the Morley Arts Festival last year – but this time was different. We’d been invited by Carol Nelson of Farfield Mill in the picturesque village of Sedbergh, Cumbria, to bring it to the wonderful industrial-base-turned-arts centre in the form of a promenade. The action would be woven throughout the building; around looms, underneath the building itself in the turbine room and even spread along the walkways leading up to the entrance – so, over an intense few months, the original piece was adapted to fit the new formula and the actors, director and stage manager set to work, creating a whole new show! The themes connected the tribulations of the “Luddites”, and their employers during the industrial revolution, with the general populace of the UK today.

In the piece, struggling to compete in the market with all trade frozen by the Napoleonic war, half-Belgian Robert Moore sets about automating his mill in readiness. Already dogged by others’ xenophobia and suspicion, his swift replacement of trained millworkers with modern machinery is quickly making him the most hated man in Stillborough. Even the loving efforts of his sister’s pupil, Caroline, and his unusual new landlady, Shirley, may fail to rescue him from assassination – as his machinery is vandalised and strange men stalk him in the shadows.

Tapping into the history of Farfield really made the place come alive for us. Over just two days, we enjoyed performing the piece five times to lovely audiences, and received great feedback. Audience comments included:

“It was very professional and authentic. The cast captured the sense of the time and portrayed it beautifully.”

“Acting and entire performance wonderful. Felt myself transported back in time.”

“It was original, deftly adapted, excellent use of space and actors’ adaptability to character. Altogether a surprising, engaging production.”

“Very moving. It was superb in every respect.”

We want to express our hearty thanks to all who attended and supported us, as well as the officials at the Yorkshire Dales Sustainable Development Fund and the Sedbergh & District Charitable Incorporated Organisation Community Fund for their generosity, and the staff, board and volunteers of Farfield Mill for their wonderful help. Big plans are afoot for Shirley, so watch this space! You can also follow us on Facebook via www.facebook.com/DangerousToKnow or on Twitter via @DTKManc.

Yesterday, we found ourselves in the territory of the prestigious “Lake Poets”.

The connection between the Brontës and Ambleside may not be immediately apparent; indeed, I only really knew the half of it until I did some further research prior to travelling up for the reading. Our November production, The Dissolution of Percy, focuses largely on the final few years in the life of Branwell, the Brontë brother, and therefore it was Branwell’s connection with the town that originally drew me there. In 1837, shortly prior to his 20th birthday, Branwell wrote to the poet William Wordsworth – a resident of the area and only a few years away from becoming Poet Laureate – asking for his advice and suggesting that the celebrated older man might offer him some constructive criticism of a couple of his poems. The letter was fairly well put-together, until Branwell’s burning ambitions got the better of him. The younger man royally shot himself in the proverbial foot by writing:

In this day, when there is not a writing poet worth sixpence, the field must be open, if a better man can step forward.

According to contemporary accounts, Wordsworth was less than impressed by Branwell’s writing-off of every one of his contemporaries – the majority of whom he respected highly – whilst seemingly naming himself as his addressee’s successor in one sentence. The letter remained unanswered.

At almost exactly the same time, Branwell’s oldest sister, Charlotte, wrote to Robert Southey, another resident of the Lakes and the contemporary Poet Laureate. It seemed the siblings were undertaking something of a networking project. Charlotte’s letter DID receive a response. Unfortunately, that response was not particularly positive and eventually proved to be very poorly calculated. When mentioned to Brontë fans today, it often garners rather a wry chuckle if not an all-out exasperated sigh. Southey famously wrote:

Literature cannot be the business of a woman’s life, and it ought not to be. The more she is engaged in her proper duties, the less leisure will she have for it even as an accomplishment and a recreation.

Three years later, Branwell found himself relatively nearby in Broughton-in-Furness as the tutor to two young boys who were part of the Postlethwaite family. On days off, he often took excursions around that area of the Lake District and, in Ambleside, found himself in the company of Hartley Coleridge, son of the poet Samuel Taylor Coleridge. Small in stature and highly strung just like Branwell himself, Coleridge was an opium addict and prone to poor health. His conditions seem now to be an eerie forewarning of the later decline of his young friend. The two got on extremely well, to the point where Branwell decided to show Coleridge translations from the Odes of Horace that he had been working on. As far as biographers have been able to discern, Coleridge was extremely impressed, and the pair seem to have started hatching a plan for the publication of the works. A draft of a hugely enthusiastic letter from Branwell to Coleridge is still in existence, in which he promises to complete the remaining translations and that, if Coleridge was able to assist in the publication of the work, he would happily split the profits with him. The letter was almost certainly sent, but seems to have remained unanswered. Coleridge’s health, both physical and mental, was poor, and he may have been struck with a bout of depression that wiped all thoughts of his young friend from his mind. The 23-year-old Branwell’s correspondence with Hartley Coleridge was the closest he ever came to literary success.

So much for the Brontës’ relationship with the “Lake Poets”.

A further link with Ambleside arose ten years later, when the local papers announced that “Miss Brontë”, authoress of Jane Eyre, would be visiting “Miss Martineau” in the town. The pair mentioned, of course, were Charlotte Brontë (now the only remaining sibling after the death of her youngest sister Anne the previous year) and Harriet Martineau, the social theorist and political writer. During her time in Ambleside, Charlotte was cursed with the presence of one Sir James Shuttleworth, who enjoyed lecturing her and another visitor – who happened to be the novellist Mrs Elizabeth Gaskell – about the finer points of writing. The two women escaped into each others’ company and a friendship was formed that would last for the remainder of Brontë’s life. Gaskell was even approached by Charlotte’s father and husband, Patrick Brontë and Arthur Bell Nicholls, to write her biography after her death in 1855.

When we arrived, the town was alive with summer tourists and washed in bright sunshine. Arriving at the library with a good amount of time to spare, we were greeted with enthusiasm and an expertly-made cuppa. The library provided a cozy backdrop for an intimate session of readings, and the atmosphere was friendly and lively throughout. We were a good-humoured crowd, and I was buoyed a great deal by the apparent interest of the members of library staff who also listened in. After the readings, I admitted to the library manager, Jane, that my study of the Brontës was really my first excursion into classic literature. She responded: “well, you have the journey of a lifetime ahead of you.”

The positive, warm and friendly responses the readings have generated have been extremely encouraging, and suggest very positive things for our production in November. Upon getting back to Manchester, we received this lovely piece of feedback from the library staff:

“A really charismatic performance… Love and deep understanding of the Brontës shines through and engages the audience completely.”

So, if you were in any doubt about attending one of our readings – there’s a reason why you should!

In case you missed us last time in Scarborough, we’ll be back on 5th September for a matinee reading at Wardle and Jones book shop at 2pm! This one’s slightly different. We’ll be exploring the life and work of the most underrated of the Brontë sisters, the accomplished social commentator Anne.

Come along: the more the merrier! No need to book. 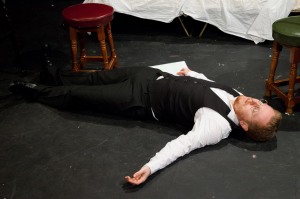 However, we DO like the beautiful Lake District, so we’re heading up to Ambleside on the  25th August at 5:30pm, where we’ll be delivering our highly popular readings of Brontë poetry and prose in the lovely library!

Take a look at the Facebook page for further details. Please spread the word – we can promise a highly enjoyable evening for all!

Another event in August! Come along to Ambleside Library on 25th August at 5:30pm to get a chance to hear gorgeous Brontë work and enter into a discussion about the unique and unusual family. 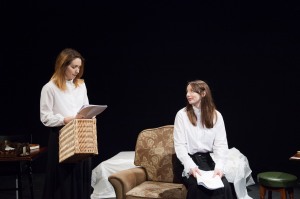 The event is FREE to attend! Please see the Facebook event page here.

Original pieces will also be brought to the stand, and audience members are welcome to donate a short piece of work for this purpose. Simply email dtkmanchester@gmail.com! 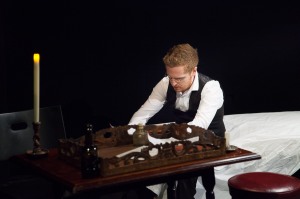 Dangerous To Know is a currently self-funded Northern theatre company, which will always be grateful of support. Our upcoming production, The Dissolution of Percy, an original piece about the final few years in the life of Branwell Brontë, will be staged in Greater Manchester and Yorkshire this coming November. For more information, and to watch a trailer for the production…

After the success of our big campaign in June, in which AD Caroline Lamb walked 130 miles in one week, stopping off to deliver readings of poetry, prose and letters by the Brontë family, we thought we’d crack the little black folder out a second time for a few of the important Brontë-related sites we’ve not yet covered* (the walking boots are staying at home this time!) 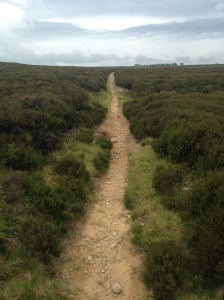 While dates are still being confirmed, we are pleased to announce that our intimate, enlightening, fun and slightly scandalous event will soon be delivered in Scarborough, Ambleside and York during August and September. Other sites may yet be added!

*Yes, we do know about London and Brussels. One day!